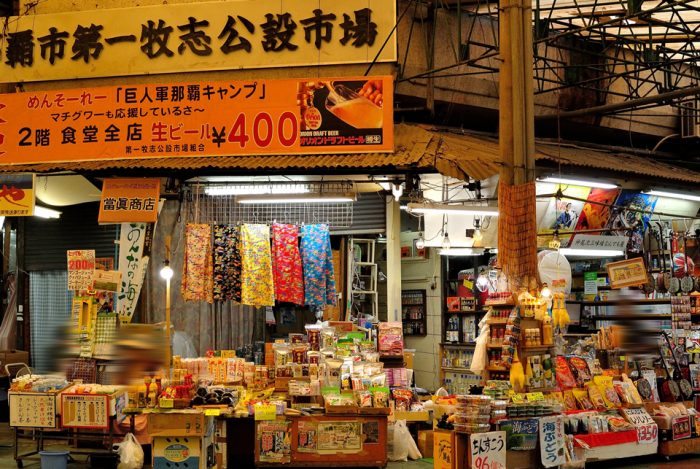 Makishi Food Market, a.k.a. Heiwa Dori Food Market has been closed and the buildings will be demolished and replaced with a new structure to house the market.  The new facility is scheduled to open in April 2022.

In recent years, the public market has become a popular tourist attraction that is a place to purchase and enjoy truly Okinawan produce and foods.

The market originally opened in 1950 along the banks of a river that flowed through the area. The site had been an unofficial market place since the end of the war where merchants sold wares, much of which was obtained by more or less questionable means mostly from the occupying U.S. military. The market facilities were mostly constructed in 1972, much of it over the river that still flows under the buildings.

Many people flocked to the market on its final day of business. The Makishi Market Merchants’ Association held a closing ceremony where the head of the association, Tomomitsu Aguni, stated, “The closure of the market, has a cultural value unique to Japan, is sad, but I believe the market will reopen in better shape in 2022.”

Originally patronized by local residents buying ingredients for traditional Okinawan dishes but with the appearance of large supermarkets, it went into decline. Efforts began to attract tourists to the market started in earnest in the 1990s with schemes like allowing visitors to buy meat and fish at stores on the first floor of the building and have them cooked on the second floor.

As the number of overseas visitors has constantly increased in recent years, foreign staff have started working in the market.

Many people are fascinated by the market’s distinctive atmosphere, its maze-like appearance, and many merchants and even the Naha City government sought to continue to use the current market, but problems resulting from the age of the buildings made it impossible.

Some of the shops will temporarily move to makeshift facilities near the old market starting in July, while the closure has prompted others to call it quits altogether.   Some people have also voiced concerns about whether the new market can attract as many visitors as the old one. “We hope to make the new market full of features unique to Okinawa while encouraging young entrepreneurs to establish new shops with new ideas in the new facility,” Aguni said.