Bad goes out and good comes in on Setsubun 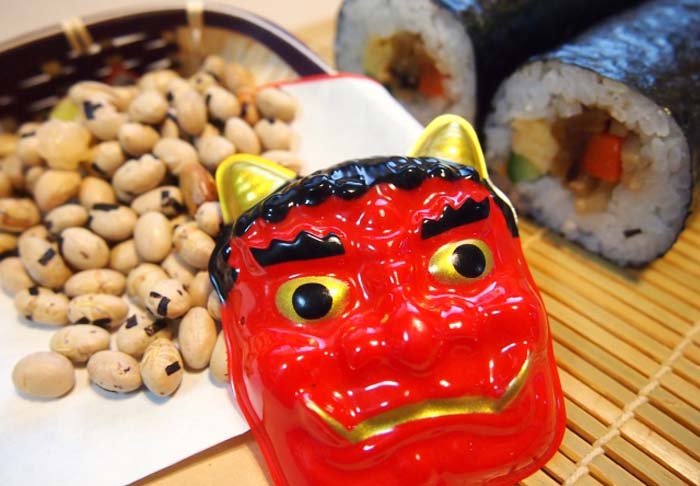 Feb. 3 is called “Setsubun-no Hi” in Japan. According to the lunar calendar, the day marks the last day of the winter, and literally means the “division of seasons (節分)”.

However, recently Setsubun has become to mean the day before the first day of spring only. It’s usually observed on Feb. 3rd. On this day, people have a customs to throw and scatter roasted soy beans in and outside of their house, shouting, “oni wa soto, fuku wa uchi” meaning “ogre out, happiness in.”

The event is called “mamemaki” in Japanese, and it’s popular especially among kids. Some daycare centers and schools in Japan organize “mamemaki” where a teacher dresses as an ogre, and kids throw roasted soy beans at the teacher.

The custom of “mamemaki” came from ancient China. It was held to get rid of bad luck and purge “noxious odors” of the previous year. This event came to Japan from China during the Nara period, and become an official court event during the Heian era. It became common among ordinary people in the Edo period.

People believe that by throwing roasted soy beans at the ogre and scattering them in the house removes the negative vibes, as they pray for safety of the family and good health for the year. After throwing the beans, people eat as many beans as their age plus one while praying for happiness throughout the year. People in some regions use peanuts instead, because they are easier to clean and pick up afterwards.

Traditionally, Setsubun is also the day to eat “Eho-maki (恵方巻)” that are thick sushi rolls believed to bring good luck when eaten while facing the year’s good luck direction. Eho-maki contain seven ingredients, such as cucumber, strips of sweet omelet called “datemaki”, shiitake mushrooms and eel, because it’s connected with the Seven Deities of Good Luck. Eho-maki is about 8-10 cm long, and one must be silent while eating it. Also, close your eyes, and eat the roll uncut while facing the Eho (恵方).

Eating Eho-maki without cutting it reflects the idea of not cutting relationships. Eho means the direction of the year’s good luck, which is determined by the year’s zodiac sign, that determines the location of Toshitoku-jin (歳徳神), the God presiding over good fortune.

In 2018, the year’s Eho is south-southeast. In February Eho-maki becomes available at supermarkets and convenience stores. Today, the custom of eating Eho-maki is becoming popular in Japan and often considered the same as Mame-maki.