Reggie Dumas has a hankering for hot, spicy barbeque sauces, and since he couldn’t find some that satisfied him, he began creating his own.

Owner of Sauce Restaurant on Highway 58 between Camps Foster and Lester, he’s been cranking out ribs, chicken, shrimp and soul food for more than 20 years, and created a niche market among customers wanting to enjoy the delights of his barbeque expertise, but eating it at home. While take out is important, Dumas has one thing that’s even higher on the priorities list.

He’s created his own hot sauce, and sees that as “the way of the future. I want to be a sauce distributor.” He first began tinkering with his own hot sauce recipe about 12 years ago, tweaking and modifying the nine-spice sauce until he had it “sort of where I think it should be.” He has now contracted a company that bottles the spicy liquid for him.

Business has been so good, that he’s planning to offer the sauce at off-base supermarkets as well, but “look out for summer. We’ve a new batch coming, and we’re concentrating only on the original sauce, since we know now what people are looking for.” His hot sauce is perfect for marinade, and also for the extra jolts onto the food after cooking. 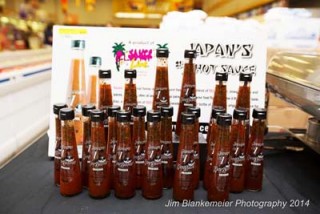 With each order at his barbeque restaurant Sauce comes an ample dollop of his homemade hot sauces. “Finger licking good,” the customers kept telling him, and they asked for some to take home, too. Ribs grilled after being marinated in an original Sauceman sauce are a popular favorite, served alongside coleslaw, French fries and bread.

Dumas began developing his own sauce because he was not satisfied with flavors of existing Japanese hot sauces made to match Japanese food. Besides, he says, since “Japanese in general don’t barbeque – they fry food on iron plates even when on picnic.” 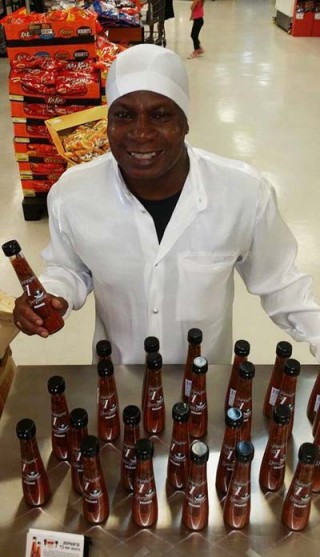 Sauceman’s hot sauce is sold in 120 ml bottles at Kadena, Foster, Courtney and Kinser Commissaries for $4.95 per bottle. It’s also available in 200 ml bottles for restaurant use and on Internet, and Dumas says it should be in off-base stores sometime during the summer. The idea is that this hot sauce enhances the taste of the food, not overpowers or kills it. It is sufficiently unique that it can be used both as a marinade and hot sauce, and by adding ketchup it becomes a BBQ sauce.

Sauce Live is an original, homemade hot sauce with a unique blend of red pepper, vinegar and spices, plus olive oil and lemon juice to give it a twangy taste. “Sauce Live,” says Sauceman, “goes great with just about every favorite food.” On the www.saucelive.jp website, the sauce can be ordered by the bottle, by the half case, or by the whole case. The sauce has been aged eight months to give it a perfect flavor.