‘Year of the Monkey’ begins in Okinawan fishing communities

Legend has it that Buddha asked all animals to meet him on the Chinese New Year. Twelve came, and Buddha named a year after each one, and announced that people born in each animal’s year would have some of that animal’s personality traits.

The Chinese New Year this year is Feb. 8th, and it ushers in the Year of the Monkey. According to beliefs, people born in the Years of the Monkey years are often fun, energetic, curious, and mischievous, but the year is also believed to bring bad luck to those born in those years. 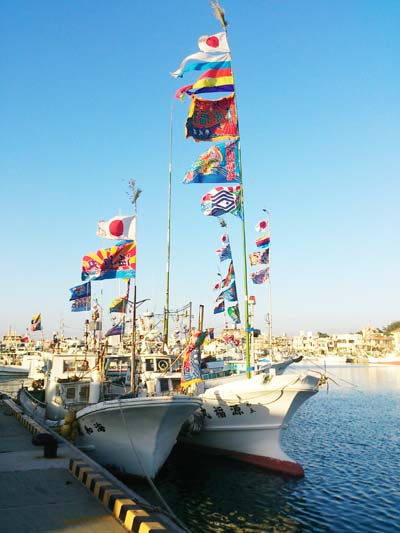 During the times of the Ryukyu Kingdom and all the way to the second World War, the lunar New Year, a.k.a. the Chinese New Year was a big deal in Okinawa, but the end of the war brought in the Americans and with them the Gregorian calendar, and the traditions of the lunar calendar and with it the Lunar New Year has been diminishing ever since.

But there are some communities that observe the Lunar New Year. The observance centers on towns and villages, where fishing is an important industry, such as Itoman City and O Island. At fishing ports, many colorful good-luck banners are hung up over fishing boats, and the bumper fish crop for the beginning year and the safety of voyage are prayed for, and the crews of the boats celebrate with drinks and festive foods.

The Chinese New Year is still celebrated on a grand scale in Taiwan, China, Korea and a few other countries that traditionally count time using the lunar calendar.

Food remains a key element of celebrating the Lunar New Year, with a mandarin orange and charcoal rolled with kelp offered on a Buddhist altar, while people pray to it with hands joined. After that, people eat pork dishes, such as the Soki soup and Suchikah, pork preserved in salt. Refrigerators weren’t common in the past, either, so salt was a common part of the diet. Customs were different, but as a means to save meat, since preserving in salt was used, the customs of eating Suchikah remains from the time when pork was eaten only at special events.

Since the mandarin orange is viewed as an offering and is orange in color, it expresses prosperity, and since charcoal does not deteriorate, a healthy long life, and kelp are offered as “Yorokonbu.” Yorokobu means being glad, konbu is kelp in English.

Moreover, when the first water is pumped up from a well in the early morning of January 1st of the lunar calendar, it is called Wakamizu meaning young water in English, and when this water is drunk, there is a legend that it can pass good fortune and good health for one year.