‘Minions’ are a set of characters based on a 2015 Universal Pictures film that, despite of a rather damning view of most critics, went on to become the 11th highest grossing film of all time with over $1.1 billion in box office world wide. 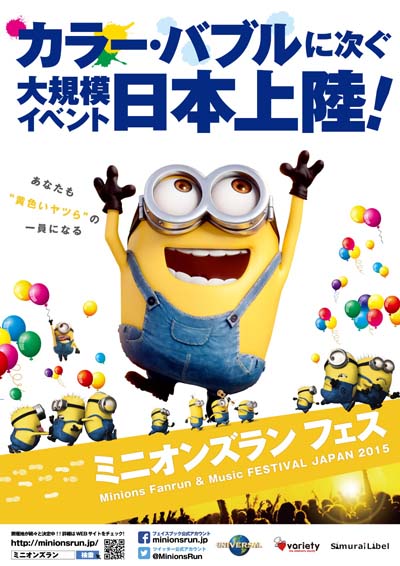 Minions Funrun & Music Festival is an event in March at Bibi Beach in Tomigusuku, to which participants are invited to dress as characters from the ‘Minions’ movie, and run or walk about three-kilometer course followed by a party on the beach. The runners will start on the course at 30-minute intervals between noon and 14:00.

Organizers expect 12,000 people to attend the event. Participants are asked to use the official Minion costume that is included in the ticket when they run and at the after party. However, people can also bring their own costumes, but they should be yellow and either shirt and overalls or jumpsuits.

After the run, there is an after party scheduled to take place between 15:00 and 20:00 that will feature popular Japanese singers, DJs and entertainers. A list of artists scheduled to perform on stage at the event is listed (in Japanese) on the event homepage.

All participants will be given a Minions costume to wear when they run, walk, dance and shoot photos of each other. There will also be food and drink stalls at the event site.

The two-day event takes place on Mar. 26th and 27th, rain-or-shine. People who plan to attend on both days will need to buy two tickets.

The venue of the event is Bibi Beach at 1-6-15, Nishizaki-cho, Itoman City. The event runs from noon to 20:00 on both days. The tickets cost ¥7,200/day for participants 13 years of age and older. Tickets for children 12-years of age and younger are ¥5,200. Three-year-old children and younger toddlers are free. Tickets and event details in Japanese are available on the website.

As alcohol is sold at the event, there will be an ID check at the gate to the venue. The ID must have a face photo of the bearer.