The most famous lord in Okinawan history is without doubt Gosamaru, a 15th century chief of first the Zakimi Castle and later the Nakagusuku Castle. Legends and stories of his life and demise have been told in books, plays, kumiodori and even operas.

A couple of years ago folks at Nakagusuku Village added a still another way to tell the tale to the local folks and visitors who just love the story. Projection mapping, a.k.a. video mapping and spatial augment reality, is a projection technology used to turn objects into a display surface for video projection.

The free projection mapping show about the legendary history of the Nakagusuku Castle’s lord Gosamaru is scheduled for Saturday and Sunday Nov. 21st and 22nd. The show starts at 17:00 on both days and last until 20:00. The last year’s show is available on YouTube.

The story is very popular among local people. More than 13,000 people came to see the show over its two days last year. This year, in order to alleviate the parking problem, people can park their cars at AEON Mall Okinawa Rycom and other temporary parking sites, from where shuttle busses will run to the Nakagusuku Castle Ruins Park, the venue of the show, starting 14:30

Gates to the park open at 15:00, and the admission to the show is free. In addition to the video mapping show, there will be live music performances and laser show on both days.

The video mapping technique uses specialized software that spatially maps a two or three dimensional object on the virtual program, which mimics the real environment it is projected on. Artists and advertisers alike use this technique to add extra dimension, optical illusions and notions of movement onto previously static objects. 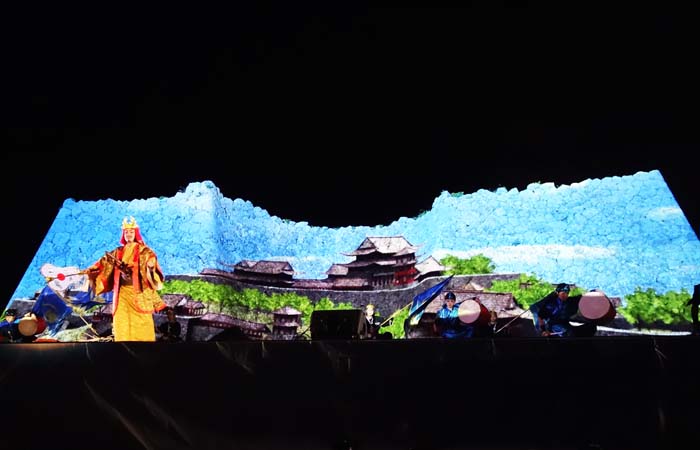 The legendary hero of the story, Gosamaru, who almost 600 years ago aligned with Shō Hashi, king of the Okinawan kingdom of Chūzan, in his invasion and conquest of the neighboring kingdom of Hokuzan. Hashi would conquer the kingdom of Nanzan to the south several years later, uniting Okinawa Island, ending the Sanzan Period, and founding the unified Ryukyu Kingdom. In recognition of his support, Gosamaru was made custodian of Hokuzan, and given Nakijin gusuku, which had until then served as the royal seat of Hokuzan.

Gosamaru served the kingdom loyally, and developed ties with the royal family, his daughter marrying King Shō Taikyū. Upon the wishes of the royal government, he oversaw the construction of a castle (gusuku) at Nakagusuku, and established himself there, serving to watch over another local lord, Amawari of Katsuren gusuku, who had grown powerful and wealthy from maritime trade, and who had his eye on the throne. In 1458, however, Amawari reported to the royal government that it was Gosamaru who was planning a revolt, and so the kingdom’s forces, led by Amawari, assaulted Nakagusuku. It is said that Gosamaru refused to fight back, out of loyalty to the kingdom, and killed himself rather than betray his king.

Amawari was executed soon afterwards, his duplicity having been discovered by a note to the king, which Gosamaru had placed in his mouth, knowing Amawari would bring his head to present to the king.

An alternate theory claims that the entire affair was organized by the royal government, in order to remove both Gosamaru and Amawari who were seen having grown too powerful rivals and potential threats to the throne.

The tale of Gosamaru’s betrayal and destruction by Amawari is among the most famous and popular of local historical legends.

Top 5 most popular stories in [ History ]