On Okinawa, June is the beginning of the hot summer season.  The average temperature is around 29 degrees C and then there is the humidity.  June is in the middle of the often rainy typhoon season, hence the high humidity factor.  Knowing this, you might be a bit confused to learn that June is also the busiest wedding ceremony season of the entire year.  You would think that the hot and humid climate of this month would send our brides-to-be running at the idea of droopy flowers, runny make up, sweaty palms and uncooperative hair styles.  But due to the fact that the tradition of a June bride holds such a significant place in Japanese history, it continues to be considered the best month to ‘tie the knot,’ regardless of the previously mentioned factors that can be a brides’ worst nightmare.

In typical Japanese style, the June wedding tradition is a cultural hybrid.  June bride wedding tradition actually arose from a Roman times tradition, well over two thousand years ago. Every year, on June 1st, the Romans would celebrate a festival in honor of ‘June’, the deity who was recognized as the wife of Jupiter and the revered goddess of marriage and childbirth.  Thus June has been considered an auspicious month to wed.  Aptly, the month of June happens to follow May, the month of ‘unhappy dead’ for the Romans.  Not a very favorable month to get married in my eyes but in my case, it was whatever my wife wanted so we were married in May. No June bride for this expat.

During the 1400-1500s, June was considered the month of celebrations; a contemporary translation would be backyard BBQ’s and tailgate party time. People would gather together in communal baths to socialize and cleanse themselves after a long, dirty winter.  June was a time when flowers were in bloom throughout the gardens, meadows and along streams. They were readily abundant to be picked and arranged for wedding bouquets and arrangements.  Interesting enough, this alignment of baths, flowers and celebrations was more than coincidental and the purpose of the flowers became two-fold.  Not only were the floral arrangements beautiful to behold and a symbol of fruitfulness to celebrate, but they also brought quick reprieve to those standing downwind from others who had not yet immersed themselves in their spring bath.  The hygiene level of this day was much different than the one-or-two-showers-per-day routine that most of us have adapted, especially during the hot and humid months… such as June.

During these celebrations, flowers were tossed in the air, dispersing their magnificent fragrance through the gathered crowds. During this day and age, romance and love were not the impetus for marital union. Even in our not so distant history, women were considered a father’s property, and as such, they would be ‘given away’ by their fathers. Often, financial transactions were a part of this process, depending on the social status of the families involved.

In Japan, this practice is referred to as ‘Omi-Ai’ in which either the parents or a third party, a.k.a. matchmaker, organizes an interview between a couple, based on birth year sign and social background, with the intention of beginning a process that will lead to marital union.  This practice still occurs but under less structured pretenses.  The interview will still be organized for the young couple but it is their final choice as to whether they wish to continue to pursue a relationship based on their own personal impression of each other, for the purpose of marriage.

Much has changed since the ‘Roman times’ or has it?  In Okinawa, bouquets and vast arrangements of flowers are still a vital part of the wedding ceremony but fortunately, this is due to their symbolism and beauty, not to mask the foul scent of our guests.  Often flowers are presented to the parents by the wedding couple in gratitude of the care and support that they have been given.   Envelopes packed full of money are exchanged between families, although not so much as a payment for the partnership but rather as an encouraging gift for the longevity of the couples’ marriage. 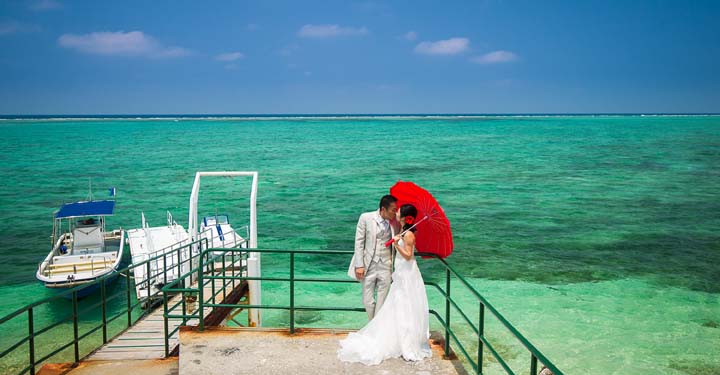 After a ‘Yui-No’ commitment to engagement, the final and most exciting step is the wedding, usually planned to take place in June.  A typical ‘Ryu Kyu’ wedding is quite spectacular for a foreigner to experience.  If you have not yet had the fortunate experience of being a wedding guest here, imagine a formal western-style wedding ceremony but add to this a dinner theater with floor shows, dancers, live bands and movie clips to keep the party lively. The performers on stage are usually part of the bride or groom’s wedding party.  Generally, they have spent months rehearsing for their big spectacle in honor of their friend(s) and/or family member.  There may be an Okinawan traditional Eisa dance, or a slow motion Okinawan dance, in which the participants wear the traditional Okinawan kimonos and present a full karate series or most likely the cousins of the bride will perform a dance for happiness called ‘Kagiyadefu.’  These are all performed with the pizazz and flare of a Las Vegas production.  Throughout the wedding, the bride and groom go through various changes of dress, as the wedding ceremony proceeds, from traditional kimonos to classic American-style attire.

In my opinion, Okinawa Weddings are exceptional as they are the perfect combination of entertainment, camaraderie and alcohol that flows wildly through the entire celebration.  For the wedding guests, it is actually quite fun but for the bride and groom, it seems to be a marathon of gratitude, acknowledgement and ‘kanpai.’ One damning task for the couple is that of visiting each table and ‘kanpai’ing with each group separately. Recall fuzzy memories of college drinking games you may have been a part of, and consider an evening full of game after game, up to as many as 50 games in the matter of that evening.  This is the burden that the bride and groom must perform in order to honor their guests and celebrate a prosperous future ahead.  That is, if they can make it through the evening of ‘kanpai.’

Hopefully, while in Okinawa, you will have the honor of being invited to an Okinawan wedding.  It is an event not to be missed, and may well end up being one of the main highlights of your year.  At this point, you might find yourself considering your list of friends and acquaintances here on the island.  Is there a couple engaged to be married included?  If not, you have until next June to play the role of matchmaker in assurance that you do not leave Okinawa without experiencing the perfect cultural hybrid of time-honored Japanese and Okinawan traditions, Western customs, love, family, friends, food, alcohol and Viva Las Vegas!