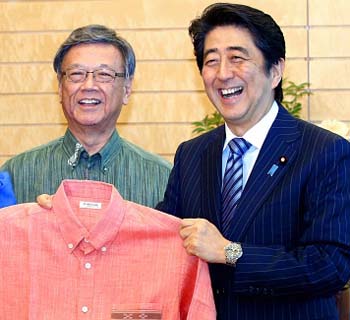 Japan’s Prime Minister was a bit surprised at a gift from Okinawa’s governor this week, given animosity over the base realignment issue, but he accepted it in the spirit of friendship and tourism promotion.

Governor Takeshi Onaga presented Prime Minister Shinzo Abe a Kariyushi summer shirt designed and made in Okinawa during a meeting in Abe’s office.  The governor asked Abe to wear the pink long-sleeved shirt, telling him it would promote tourism in Okinawa.  Abe promised that he would, going further by adding he would have all his ministers wear the Kariyushi shirts at a cabinet meeting next week as part of the Cool Biz campaign.  The Cool Biz campaign encourages office workers to curb air conditioner use and dress more casually to reduce emergency consumption.

“The cabinet ministers will buy their own Kariyushi shirts,” Abe promised, drawing a chuckle from Onaga and others at the Tokyo meeting.  The light hearted moment came during a time when Onaga and Abe are at odds over the future of Futenma Marine Corps Air Station in Ginowan and its relocation to Henoko, which is opposed by Onaga. However, the subject never even was raised during the meeting. Onaga said after the meeting that he believes it possible to drop politics for at least a single day each year.

On the other hand, Nago Mayor Susumu Inamine, raised the issue again during his meeting with Gen Nakatani, the Japanese Defense Minister, in Tokyo.  He told Nakatani that a resolution opposing the plan for creating the new base at Henoko was approved by attendees at a mass rally earlier this month at Cellular Stadium in Naha City.  He explained he hopes the central government will understand and accept the desires of the Okinawan people.  Nakatani repeated the official government stance, again noting the only way to remove dangers at Futenma is by relocating the base now located in densely populated Ginowan City, to the planned site in Henoko.