Nago City is large, beautiful and center of controversy

Okinawa’s Nago City to the north is the largest autonomous community on the island, and spans the breadth of the island from Pacific Ocean on its eastern boundary to the China Sea on its west coast.

With the exception of a tiny part of Kunigami Village in the farthest north, and a sliver of land in Itoman City at the southernmost tip, Nago boasts being the only municipality that reaches both coasts. The Bankoku Shinryokan resort MICE facility located next to Busena Terrace Hotel in Nago has the bragging rights for having been the venue for the G8 Summit held in 2000, which made Nago very popular.

Nago’s Henoko district is probably currently the most famous area in Nago because of the Futenma base move controversy. For those new to Okinawa, Henoko and the Marines’ Camp Schwab is the designated site for a replacement airfield facility, a new home for the contentious MCAS Futenma, now located in Ginowan City in central Okinawa.  The project is under way, although Nago City’s mayor, the Okinawa governor and a considerable number of Okinawans are opposed to the project.  Nonetheless, the project blessed and paid for by the Japanese central government is under way.

The northern part of Okinawa, including Nago City, is called “Yanbaru” in Okinawan dialect. It means forest field and much nature. There are a lot of rare species inhabiting the northern forests like the Yanbaru kuina (Okinawa rail), Yanbaru Tenagakogane, and Noguchigera that are all assigned the natural monument status. Even in the city residential area, there is much nature close by, and easy access to big forests, with rivers and waterfalls just 10 minutes from the city area. The Nangusuku, or Nago castle ruins, also called Nago Central Park; is the main venue of the Nago Cherry Blossom Festival held the last Saturday and Sunday of January. every year. The 54th iteration of the festival runs the 31st of January and February 1st this year.

During the festival many stage events take place at the base of Mt. Nago, and the main street running through the center of the city will become a pedestrian paradise on both days. You will find a huge banyan tree called Hinpun Gajumaru at the entrance of the main street. It’s about 300 years old and one of the most famous sightseeing spots in Nago City. There are many more sightseeing spots in Nago like Neo Park Okinawa, Nago Pineapple Park, Goya park, Okinawa Fruits Land, 21st Century Forest Park, Underwater Observatory, Haneji inland sea and much, much more!

There is also a special company located in Nago City that everybody in Okinawa knows. That is Orion Beer Co. All who drink Orion beer know it is produced in Nago.  Visitors can join a backyard tour every day at the brewery, but the tour is even better if you book in advance. No English coordinator is on the tour, but it’s good enough to enjoy just looking, and a glass of beer visitors can rink for free at the end of the tour.

Yagaji island is also one part of Nago City and its connected by two bridges with Okinawa main island now. One is Yagaji bridge, which if very old been in use for a long time. After Kouri bridge was built connecting to Yagaji and Kouri islands, many people visit Yagaji for the beautiful view and easy access to Kouri island. Another bridge called Warumi bridge connects to Yagaji island to Nakijin village. 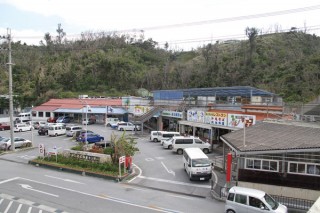 Road Station Kyoda is the oldest road station on Okinawa, and won the Most Popular Road Station in Japan award in 2014. The facility is selling not only agricultural and other products from the northern part of Okinawa, but has also various food booths and souvenir shops, which, of course, are selling products from northern Okinawa, too. In addition, the national lottery (Takarakuji) kiosk at Road Station Kyoda has a reputation of selling a high number of winning tickets. 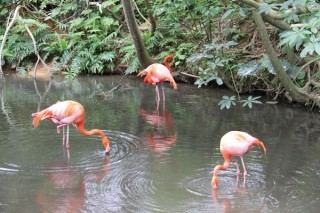 Neopark is a zoo & botanical park in Nago City. In the zoo, a huge flock of birds of numerous kinds are living in a free-range enclosure where visitors can feed and even touch them freely. Also there is a large pond within the park where schools of fish of many species, including arapaima, the largest fresh water fish in he word, are swimming. Visitors can watch them from a submerged tunnel. For kids, a light railway running around the park is exciting! Its runs through a jungle, over the pond, and is much fun!! 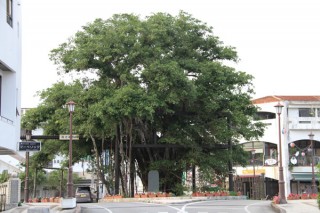 Hinpun Gajumaru is a giant banyan tree that is about 300 years old and grows at the entrance of Nago’s main street. Hinpun means a wall that people in the old times used to build at the entrance of their houses on Okinawa to hide the premises from outside. One can still find them at old houses in the countryside. There is a stone monument built in 1750 just next to the tree, and it also looks like it originally was a “hinpun,” so people started to call the tree Hinpun Gajumaru. 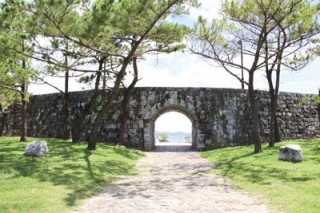 The Nago 21st Century Park is located on the coast of Nago City. The facilities in the park include a beach, playground, baseball stadium, soccer field, outside stage and more. Its beach is man-made but is very clean and long with white sand. The children’s playground area is huge and a stone wall on the playground looks like an old Okinawan castle ruin. Nippon Ham Fighters, a Japanese professional baseball team holds its spring training camp in Nago every year, and many fans come to the 21sr Century Forest baseball stadium during the training season to see their team practice. 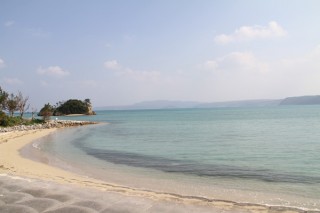 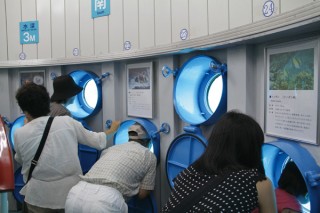 The Busena Marine Park, a part of the Busena Resort area on the south side of Nago offers a chance to observe marine life from the Underwater Observatory that features a panoramic 360-degree underwater view through its 24 round windows. Even when bad weather hampers a visitor’s stay on Okinawa, one can watch the beautiful underwater life of the Okinawan ocean here. Whale-shaped glass bottom boats that operate from a pier next to the entrance of the observatory, provide exciting close-up views of porcupine fish, clown fish, lion fish, anemones and other tropical sea life in the area! 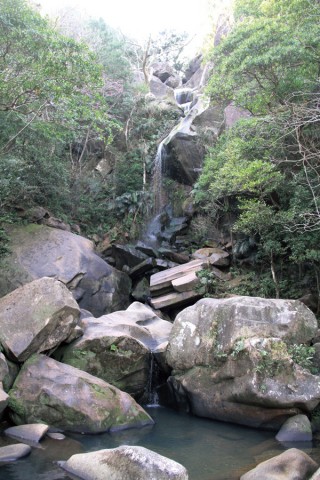 Todoroki Falls are one of the most famous waterfalls on Okinawa. They’re located in the Sukuta district of Nago city and have a very easy to access from a car parking lot nearby. The waterfall is 28m high, streaming into a six-meter wide basin that is 1.5m deep. There is an old bridge, and the place has very calm and nice atmosphere, with the relaxing sound of the falls. Late January through the end of February, some cherry trees blossoming around the falls welcome visitors. Although the basin is not big enough to swim, the water is very clear and the view wonderful. 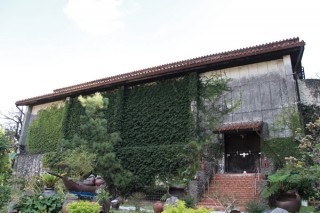 Helios Distillery is the one of the largest Awamori distilleries on Okinawa. It’s located in the Kyoda district of Nago, and. its most famous Awamori brands are “Kura” and “Todoroki.” Kura is very unique Awamori because its golden color that is derived from the wooden barrels, in which it matures. The distillery also includes a micro brewery that produces beers like as Goya Dry and some other craft beers, Helios’ other products include rum, Habu Sake, shochu, umeshu and other unique Okinawan liqueurs. Helios Distillery accepts visitors for backyard tours every day except during the New Year holidays. Call 0980-50-9686 in advance for a tour. An English-speaking tour guide is available.