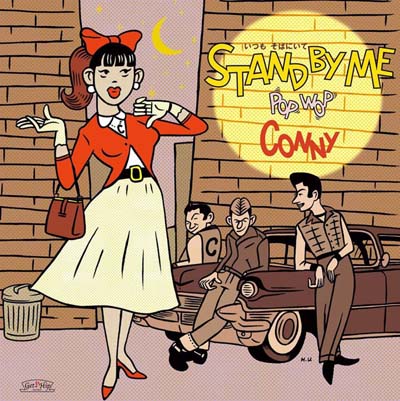 Conny, the queen of Rock n’ Roll, is hosting her “Conny” show as a free stage event at San-A supermarkets this three-day holiday weekend.

The most famous female Rock n’ Roll or oldies music singer in Japan, “Conny” will be on stage at San-A supermarkets over the three-day weekend, including “Coming-of-Age Day” on Monday, January 12th.  She chose her stage name as Conny because she admired Connie Francis very much, and she will sing Connie’s songs like “Vacation”, Lipstick on your collar” and “Where the boys are” on stage this weekend, along with other oldies. Her fans range from little kids to older persons, and you will have fun with Conny’s band at San-A. Conny’s official site http://www.conny.jp/index.html.

For something more special this time, she will sing “Stand by Me” a song of Ben E. King because she sang a duet of the song’s Japanese version with Ben E. King last year when King did his Japan concert tour. Ben allowed her to sing the song in Japanese, and also releasing CD. The newest CD, including “Stand by Me” in Japanese, “Why do fools fall in love” and one of the biggest Drifters hits, “Save the last dance for me” is selling at each performance.