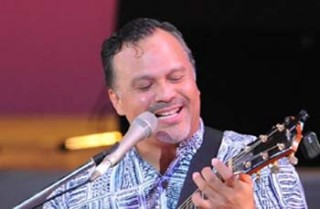 Weldon Kekauoha, a Hawaiian with a fistful of awards, including Most Promising Artist of Na Hoku Hanohano Awards, is one of three that headline the entertainment side of the evening at Erythrina Nishihara Hills Garden. Kekauoha is best known for his Ka Lehua Ula song, which inspires hula dancers to line up to sway and move to the tune.  His new album, Pilialoha, which is already popular in Japan, will be featured.  The Sunday program begins as doors open at 5 p.m., with entertainment kicking off at 6 p.m.  Admission is ¥10,800 for adults and ¥5,400 for children, which includes the special full-course meal and free drinks including beer, Awamori and soft drinks.

Reservations for the dinner show are being accepted through Friday at (098) 942-8201.  Joining Kekauoha will be Na Kuini, a trio known for their high notes falsetto.  Na Kuini won Ka Himeni Ana competition in 2012.  The competition requires performances without microphones and electric instruments.  The Hawaiian Hula dance group Halau o Ka Manu Hula Le’a will add some glitz and glamor to the show.

The music of Hawaii includes an array of traditional and popular styles, ranging from native Hawaiian folk music to modern rock and hip hop. Hawaii’s musical contributions to the music of the United States are out of proportion to the state’s small size, with styles like slack-key guitar well-known worldwide, while Hawaiian-tinged music is a frequent part of Hollywood soundtracks. Hawaii has also made a major contribution to country music with the introduction of the steel guitar.

Traditional Hawaiian folk music is a major part of the state’s musical heritage. The Hawaiian people have inhabited the islands for centuries and have retained much of their traditional musical knowledge. Their music is largely religious in nature, and includes chanting and dance music. Hawaiian music has had an enormous impact on the music of other Polynesian islands; indeed, music author Peter Manuel called the influence of Hawaiian music a “unifying factor in the development of modern Pacific music”.