To many, Kadena Town is synonymous with hosting the largest U.S. military base in the Pacific, but the town is eager to turn peoples’ eyes beyond that to discover its economic impact on Okinawa.

Kadena Town area is officially 15.04 square kilometers, and it’s located in the middle of Okinawa south of Yomitan, north of Chatan and east of Okinawa City.  In reality, though, 83% of Kadena Town land is not really the town’s, as it makes up Kadena Air Base.

Before World War II, Kadena was a part of Chatan Town, and because of its location in the middle part of Okinawa, it was an important place. Okinawa’s light rail Kadena Station was the northernmost point of the railway line, and there were schools, a police station and a sugar company at that time. Literally, it was very important area for education, culture and economy for the middle area of Okinawa.

A Japanese military airfield was built in the area in 1944, and that’s why the U.S. attacked the Kadena area so often, destroying almost all buildings, facilities and important cultural assets. In 1945 following World War II, people could still walk across some parts of the Kadena Air Field but in 1948 the U.S. Military began enhancing security functions, totally shutting off the base from the communities. This cut Kadena area from Chatan, and Kadena became a town itself in 1948. In addition, after Kadena was separated from Chatan, the U.S. Military took more land from the town for use as an ammunition storage area as the Korean War began. Today, 83% of the town’s land mass is still occupied by the U.S. leaving only 17% of the town area to local people to live. Still, Kadena Town doesn’t want to present Kadena as only a base town, and keeps developing the area with support from the central government budget.

Some imagine Kadena as such a small area without much to do, but that’s not true, and actually, that’s far from it. There is the Hija River streaming through Kadena Town that is the largest drainage basin on Okinawa’s main island, and a walking trail just beside Hija River is awesome. Along the Hijya River walking trail, there are a couple of parks, Yara Castle Park is a very relaxing place, and a river festival is held there every year.

Mizugama seawall offers a breathtaking view of sunsets over the ocean. Visitors can swim at Kadena Marina, then go shopping next door to Navel Kadena where there is the Ryukyu Dragon Pro-wrestling ring offering regular pro-wrestling shows for the entire family to enjoy almost every weekend.

The Kadena Road Station is very famous among tourists, and every day many people visit there. The Kadena Culture Center is also available as a concert stage or to play drama recitals.

Now, it’s the time to hold the Noguni Soukan Festival, the biggest festival in Kadena taking place this weekend at Kaneku Seaside Park. Noguni Soukan was from the area that is now Kadena Town, and a person credited for bringing the sweet potato cultivation from China to Okinawa in 1605. That saved Okinawa from hunger during the peak of the Ryukyu Kingdom era and eventually the sweet potato spread to mainland Japan for the benefit of people there. Although no one knows his name, as “Noguni” refers to the village he was from and “Soukan” was his title, Noguni Soukan of Kadena is the most famous Kadena native today. The Noguni Soukan Festival will be held this weekend on Saturday and Sunday. 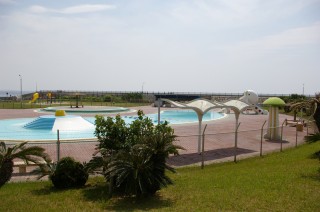 Kaneku Seaside or Kaihin Park is located on the coast of Kadena Town. The park has a leisure pool, tennis court, gateball (lawn croquet) court, baseball courts, a soccer field and more. It’s the biggest park in Kadena Town. The leisure pool is open only during the summer season through the end of September.  A long seawall guards the park from the ocean and is an excellent spot to admire the beautiful ocean and gorgeous sunsets. Plenty of free parking is available. Kaneku Seaside Park is located at http://goo.gl/maps/MyeM6 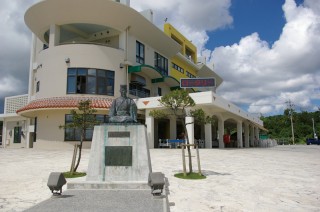 Kadena Road Station is a bit different from other road stations. Many visitors, including foreign tourists, come to the Kadena Road Station specifically for a look at the U.S. Kadena Air Base. From its 4th floor one can see the vast base and its runways. On the first floor, there is a famous hamburger shop, souvenir shop, booths selling fresh produce and a resting room. On the 3rd floor, there is an education facility about Kadena Town, the base and its history. A restaurant occupies the second floor. The Kadena Road Station is at http://goo.gl/maps/V3cF3 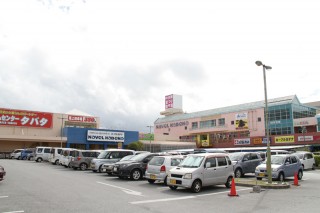 Navel Kadena is located in the Kaneku area of Kadena Town. Located just next to Kaneku Seaside Park, it opened in 1992 with Kou’s membership supermarket, Toys ”R” Us, McDonalds, and Sakumoto DIY shop as the main tenants. Most of the original tenants have moved since and other tenants have taken their place. Tabata DIY Company took over the property in 2011, and is running the business now. Currently, a Tabata DIY shop, Kanehide supermarket, cellular phone companies, Daiso ¥100 shop, Marue clothing shop, furniture shop, Shakey’s, Currency Exchange, optical shop, book store and smaller outfits fill the facility. Ryukyu Dragons Pro-wrestling Co. performs regular pro-wrestling shows every weekend at the Kadena Arena on the third floor. Navel Kadena is at http://goo.gl/maps/SeyRD 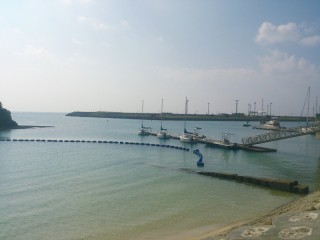 Kadena Marina is a U.S. Air Force facility, located on Highway 58. Although it is a U.S. Military facility, the gate is currently open to anyone to access the marina, and take a bite at its restaurant. Within the premises there is the tomb of Noguni Soukan, a man who introduced the sweet potato from China to Okinawa during the Ryukyu Kingdom era, saving much of Okinawa from regular famine. Kadena Marina is open at 10 a.m. on weekdays and 7 a.m. to 6 p.m. on weekends and holidays. Kadena Marina is at http://goo.gl/maps/xYIIT 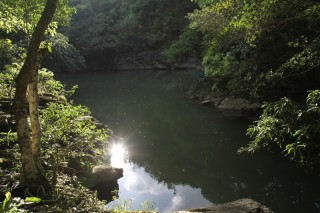 Yara Muruchi looks like a big pond but is actually a part of Hija River flowing through Kadena Town. It’s a deep green pond, and there is a folk story about a huge python that used to live in the pond. The python used to make storms or flood damage, and local people believed that if they offered a young girl to the python, any trouble would disappear. Then one year, a devoted girl decided to offer herself to the python, but at that time a god appeared and made the python vanish and rescued her. Then the girl married a prince and became happy. To this day some local people come to pray to the pond once a day. Yara Muruchi is at http://goo.gl/maps/nly70 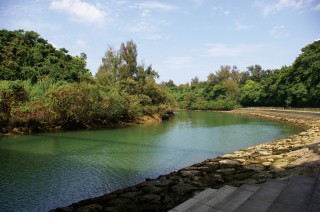 Hija River is the largest basin area river on Okinawa, and the source of water for the southern part of Okinawa Island. The river starts from Okinawa City and flows through Camp Shields, then streams along the border between Kadena Town and Yomitan Village. There is a trail that follows the river, which is popular among bird watchers. It’s really nice place, but sometimes the river floods during heavy rains or typhoons, and the walking trail is closed. The Hija bridge was made of wood a long time ago, but floods broke the original wooden structure regularly. and a stone bridge was constructed in 1866 to replace it. The current bridge on Highway 58 that replaced the stone bridge was built in 1953 as the road was expanded into Highway 58. Hija River is at http://goo.gl/maps/xSbxu 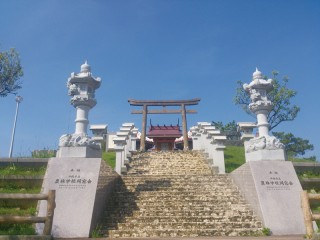 Noguni Soukan Park enshrines Noguni Soukan, a Royal Government official who brought the sweet potato from China to Okinawa. Although very little is known about Noguni Soukan – “Noguni” is the name of the village where he’s from, located within Kadena Town, and “soukan” is his official title, and not even his name is known – his act ensured that Okinawa had a food source that was not destroyed by frequent typhoons thus practically eliminating the frequent famine and allowing Okinawan population to multiply within a couple of generations. There is a shrine, torii gate, war memorial, playground and a good view over the ocean. The park is located just next to Kadena Junior High School at http://goo.gl/maps/MFk7W 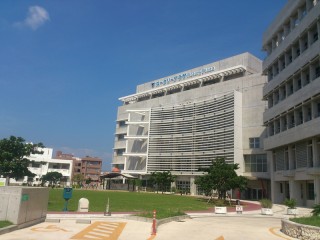 Kadena Rotary Park is located inside the Kadena Rotary Circle. The original Kadena Circle was constructed by the U.S. forces just after the WWII at the intersection of four main roads. The circle was dismantled and the area completely redeveloped in 2008. In the park there is a green lawn and a multi-purpose outdoor stage for festivals and other events, and people can relax in the park. The rotary area now houses the Kadena Town Office, culture center, the Japan Self Defense Bureau Okinawa Office, and the local Immigration branch office. http://goo.gl/maps/MZrvU