Okinawa is famous for being the island where people live to be the oldest, and Ogimi Village has some of the longest living citizens in the world.

Ogimi Village is located in the upper northern part of Okinawa, just north of Nago City, west of Higashi Village and south of Kunigami. Ogimi is famous for not only longevity but also Shiquasa, a citrus fruit, and Bashofu, a very traditional Okinawan cloth. More than 60% of Shiquasa production in Okinawa comes from Ogimi Village and this citrus contains remarkable quantities of citric acid, nobiletin, vitamin C, vitamin B1, carotene and many minerals. Especially important is nobiletin, which prevents cancer in general. It is also said that shiquasa could be a factor in the area’s longevity.

Bashofu is a fabric made of the Basho plant, which is much like a banana tree. A yarn of bashofu cloth from string of the Basho plant is light-weight and feels soft and well ventilated to wear.  It has more than 500 years of history and still some people keep producing Bashofu . Bashofu of Kijoka district in Ogimi was designated as an Important Intangible Cultural Heritage in1974. Toshiko Taira is 93 years old and has contributed to the rebirth for Bashofu of Kijoka. She was designated a human national treasure in 2000.

Shioya Bay is located in the middle of Ogimi Village, and people were going through bay side streets to the opposite shore until Shioya Bridge was built in 1963.  The current bridge is the second generation Shioya Bridge built in 1999.

Nature in and around Ogimi is fabulous too. Ta-waterfall is in Ogimi Village, and around Taiho dam area nature abounds and the view from Mutabaru Observatory is perfect! You might get a chance to meet a Yanbaru Kuina, which is the bird officially designated a Natural Monument.

One of most traditional ritual events in Ungami takes place at the Shioya area in Ogimi, where “Ungami” draws much attention. Ungami is is a ceremony to pray for safe fishing and good catches. It is held the first day of the Boar just after the Obon festival on the lunar calendar. On that day, Noro (shamaness) pray for safe fishing and good catches to Niraikanai (Lotus Land, paradise in Okinawan mythology), and dancing by only females takes place. Then a Haarii tournament starts after the dance, and females go to the ocean and soak their bodies and cheer each district’s haarii boat. The Ungami of Shioya was designated a Significant Intangible Folk Cultural Asset in 1997. 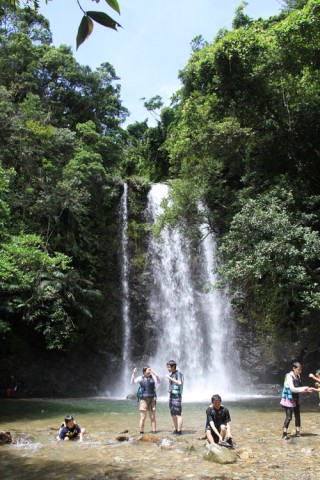 Ta-Taki Waterfall is located within Ogimi Village. Visitors can access the Henan River by  car, but after parking must walk about 30~40 minutes upstream along the river to reach Ta-taki. Some parts of the way are hard to climb or come across for small children, so children coming to the hike should be five years of age or older. “Ta-Taki” means “Two waterfalls” in Okinawan dialect, and visitors are sure to be impressed when by the waterfall after a long walk. Do not visit the Ta-Taki during rain or after a heavy rainfall, as the path becomes slippery and dangerous.    http://goo.gl/maps/b1ppA 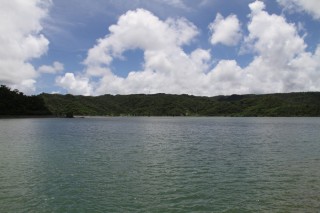 Shioya bay is located in central Ogimi Village. The bay is a very large body of water, a little like a lake, and is usually very calm. Some settlements are facing the bay, and village people practice the Shioya Ungami ceremony that is designated a National Important Intangible Cultural Property. Ungami is the festival of the Sea God, during which village women pray for good catches and safe fishing once a year. The schedule follows the Lunar Calendar to this day. During the ceremony, female shamans pray at holy places during the day the day, followed by the females of the village dancing on an open space, usually on a beach. Then a Haarii race (Dragon Boat races) starts. Each settlement’s women cheer the men racing in the Haarii while bathing in the bay.  http://goo.gl/maps/CUCKI 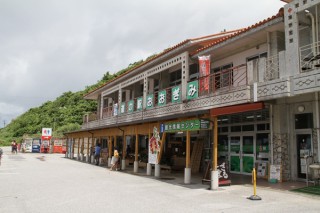 Ogimi Village is famous for its residents’ longevity and shiqwasa citrus fruit. The Ogimi Road Station serves fresh shiqwasa during the season from about September through January in general. Ogimi soil grows the Japanese daikon radish very well, and its season stretches from November through May. Ogimi radishes are very big and are for sale at Ogimi Road Station for a reasonable prices. The facility has two restaurants, serving fresh locally grown food, while visitors enjoy a very nice view. There is a waterfall is next to the facility cooling the surroundings nicely in the summer heat.   http://goo.gl/maps/FWuDi 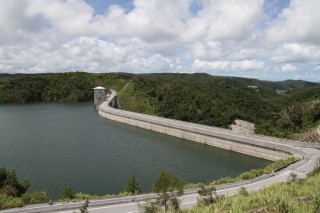 Taiho Dam is the second largest dam in Okinawa, and was completed in 2011 after over 20 years of construction. Being the newest dam on Okinawa it is a very cozy and clean place. There is a resource center “Bunagaya-kan” at the dam area, which is free to enter and look. You can drive around the dam and have a very close look at its huge lush and wild nature. Noguchigera, an indigeniuos Okinawan bird designated as a National Monument inhabits the area.  http://goo.gl/maps/ouFxJ 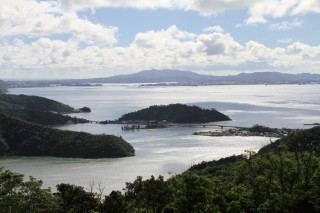 Mutabaru Observatory used to be a part of Resort Hotel Sha-Bay that is closed, and looks like in ruins now, so you can’t enter the hotel area.  The observatory is located at just before the hotel, and anyone can enjoy a superb view from there. The view of the Shioya Bay and the East China Sea is very scenic, and the sunsets are super.   http://goo.gl/maps/pEm5S 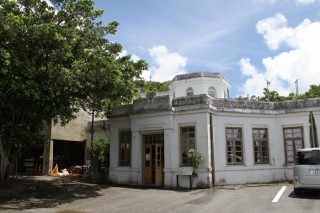 The old Ogimi Village Office is located in front of the current Village Office of Ogimi. The office was built in 1925, and is the oldest public concrete building on Okinawa. It was used as the Village Office until 1972, and still is used as one of the village offices now. The building was built in an octagon shape in order to make it stronger against typhoons. It was designated as a Prefectural Important Cultural Property in 1997. It is a two-story building where one can climb up the stairs and see the ocean view from the top. In old days, the mayor of Ogimi looked at the weather from the building and announced his observations to local fishermen.  http://goo.gl/maps/zsLr4 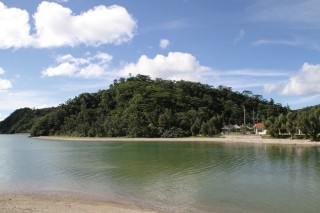 Miyagi Island is located at the mouth of Shioya Bay, and connected to mainland Okinawa with Miyagi Bridge to the south and Shioya Bridge to the north. It’s an actual island, but as it is very close to Okinawa’s main island, especially across Miyagi Bridge, many people don’t realize it really is a separate island. Even most Okinawans do not really consider it an island. The whole Miyagi Island is designated an Okinawa Shore National Park. The area of the island is just 0.24 square kilometers, and is about 2.8 kilometers around. Some 150 residents live on the island.  http://goo.gl/maps/qAt8h 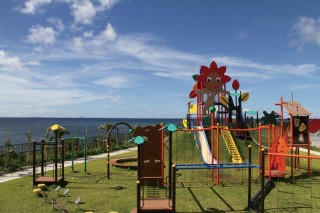 Yuinohama is located on reclaimed land, and boasts a new residential area of Ogimi Village. It’s located next to the ocean and has a very luxurious view. About 50 new houses will be built there in the near future, and its newest park is already installed next to the residential area. The Yuinohama Park has various children’s play equipment installed like sliders, gyms, court, and trampoline. Theirs is a gateball (croquet) court and space for residents of all ages to have a fun time.  http://goo.gl/maps/89kpd 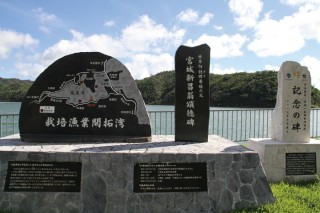 Shinsho Miyagi was the person who established oyster cultivation in Okinawa. Born in 1884, he was from Ogimi Village. After he graduated from the Kunigami Agricultural School, he learned about cultivation for oysters in Canada and founded his own fishery company. After he returned to Japan and worked as a cultivation researcher in Kanagawa Prefecture, he established a method to cultivate oysters in Miyagi Prefecture that is used all over the world to this day. He was called the King of Oysters.   http://goo.gl/maps/IPz8H