Chatan Town: some know it as American Village or Hamby Town and even just Mihama. Whether the name is called, it is very well known as a place to have fun with friends and go out on dates.

More recently, it’s gained fame with tourists from both mainland Japan and abroad, but there is a side to this idyllic bastion of international tourism that many are not aware of.. Let’s share some history.

In the Ryukyu Kingdom Era, what is now Chatan was made up of nine villages; Aniya, Chatan, Kuwae, Heianzan, Sunabe, Noguni, Yara, Kadena and Yamauchi. When Ginowan was established in 1671, Aniya and Yamauchi were incorporated into Ginowan district and Goeku district. From the remaining seven, five new villages were split off, bringing the total to 12.

In 1908 with the special village/town system established, each of the 12 villages was renamed. The first Town Hall was located in Hamagawa, and the area prospered with rice production. However, the town changed dramatically during World War II.  With Japan’s defeat in WWII, the whole village of Chatan was occupied territory of the U.S. armed forces and was off-limits to local residents. Six months later, with the partial return of the Tobaru district, the approved residential areas of Kadena and Jagaru were expanded and the villagers started regaining land, little by little. In December 1948, Kadena Village was

created through a forced split. Subsequently, the Kitamae, Sunabe and Hamagawa districts were returned.

In April 1980, the eight administrative districts bid farewell to the village system of the previous 72 years and underwent reorganization into 10 administrative districts, which were adjusted for new development. In 1998, the current Town Hall was built within the Camp Kuwae district, after which Chatan Town explored new possibilities such as operation of wind power facilities. The northern portion of Camp Kuwae was returned in 2003, and the district of Mihama created, bringing Chatan to its current 11 districts. Since the completion of Mihama American Village Resort Town in 2004, the west coast has undergone significant development and with the full cooperation of both east and west sides of Route 58, Chatan is driving ahead with new urban development.

Currently, Chatan is undergoing the Chatan Fisherina Development Project which is an overall plan aimed at promoting the town’s fisheries and revitalization of the west coast. In this project the fishery, marine recreation, tourism and resort industries are merging to form a “Marine Industry Town” where people can live in cooperation and symbiosis with nature and ocean.

Another huge project is the Kuwae Ihei Land Readjustment Project. This district was returned from the U.S. military facility site in March 2003. It is hoped this land would be used as a business hub for both commercial and residential areas, having the Town Hall as a center. Land along Highway 58 has been developed as a commercial district in close conjunction with the present Mihama district, and a quiet low-rise private residential area is planned for the east side, while the green space on the northeast is scheduled for partial conservation.

Sunabe is a district in Chatan that is a very popular spot for scuba divers, with many diving spots in the area being okay to dive when conditions at other popular sites are not so favorable. Surfers can also be seen here, especially when a typhoon is on its way to the island and the sea conditions are yielding more extreme thrills. The Sunabe Seawall’s real fame comes from its Graffiti and murals depicting everything from advertisements, renditions of famous works of art, seaside scenes, and love notes. The seawall is a real chance for budding artists to show off their talents. It’s also a nice place for walks along the beach or just to relax. There are also a fairly good number of restaurants, cafes, and izakayas in the area, making it a great place for a night out and a bite to eat.

Araha Beach and Park is located in the Hamby area. It is one of the most beautiful beaches the island has to offer. The 800-meter-long Araha beach is popular among locals, offering various water-based activities. The beach is part of Araha Park, which contains three half-basketball courts, a jogging track, playground equipment and a long bike/walkway stretching the length of the beach. There are numerous large, covered gathering tables, which are great for picnics or larger gatherings, and nearby kiosks will ensure you’re never far from refreshments. Araha Beach and Park is a two-minute drive south of Mihama American Village, off Route 58, and offers free parking. Map: https://goo.gl/maps/hgszD

Chatan primarily runs along Route 58 and features a largely man-made coastline, which includes the area of what used be the U.S. Marine Corp base known as Camp Hamby (now Camp Foster). The northern half of Kitamae is nicknamed “Hamby Town” in recognition of this, and the Hamby Post Office is one of the first Japanese Post Offices to have an English name. Parts of Camp Foster and Camp Lester are in Chatan.

Chatan Town’s Jagaru Park is small, and it’s only four years old, but it’s a wonderful place to escape the pressures of everyday life. The family park features playground equipment for the kids, gate ball (croquet) for adults, an observatory for the entire family, and plenty of green grass to lounge on and have a picnic. There’s a stream and a pond, and Jagaru Park is filled with trees and flowers to let visitors relax and enjoy being outside. Jagaru Park is located in Chatan Town’s Jagaru area, a narrow area with rolling hills that has slowly developed in recent years. It is located at 110-1 Aza, Yoshihara, in Chatan Town. 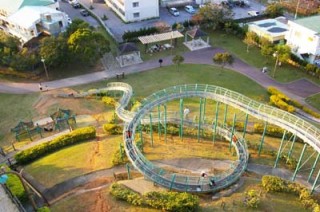 Athletic equipment, basketball courts, and roller slides along a gentle slope make Tobaru Park a fun spot for a weekend family outing. Located along Route 24, behind Chatan Junior High School, Tobaru Park is at 554-1 Yoshihara in Chatan Town. The park is open daily until 10 p.m. Parking is available for 20 cars, and there’s plenty of green space in the 4.6-hectare leisure spot. Aside from the athletic opportunities, there’s an observatory in Tobaru Park, an ideal vantage point to look out across the crystal ocean waters. Map: https://goo.gl/maps/J6RqT 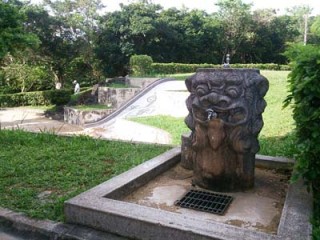 Kamisedo Kuwae Park has plenty of outdoor playground equipment for youngsters to climb, jump and frolic, but it also boasts a children’s play hall inside the park. The play hall is filled with pictures, books and games, and has programs for music and dancing. Adult park staff members monitor the play hall, giving parents an opportunity to relax and let their kids play alone. A variety of playground equipment is scattered across the spacious park, including a long sliding board, a sand box and ropes to climb on. Children have plenty of options, and parents have opportunities to simply relax and take in Kamisedo Kuwae Park’s beauty. Restroom facilities are available in the park. Parking is provided in front of the Children’s Play Hall, but park officials caution there are only a limited number of spaces. They encourage people to park outside the park and walk in. Map: https://goo.gl/maps/tk3zo 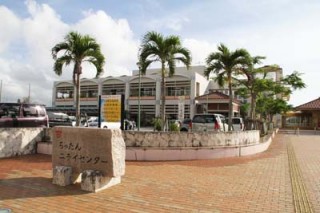 Kanai Hall is a multi-purpose hall that can accommodate the stage and orchestra format using mobile bleachers in the space of presentations and the creation and appreciation of art and culture of the town. Additional amenities include a theater for concerts and lectures, etc. of small and medium scale, and as a place for a variety of creative presentations. As a base for lifelong learning of Chatan-cho, the center has expanded and developed its central community center function. The Lifelong Learning Center is a facility that corresponds to the learning needs of the townspeople. Map: https://goo.gl/maps/JT9qk 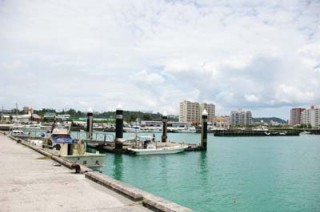 Chatan is advancing the Fisherina development project as a new facility for leisure and interaction, closely linked with the fishing industry. In cooperation with the surrounding area, this project aims to form an interactive hub merged with the aquaculture industry collaboration between the diving and fishing industries, proving a place for experimental learning, use of fishing boats for tourism, as well as value-added growth and consolidation achieved through construction of a supply system for fishing. It is also expected to serve a marine traffic function as a gateway to the sea, as well as ensure job creation and development of new industries by individuals and companies.