Summer is right around the corner, and this year Okinawa is forecast to welcome more visitors from all over Asia than ever before, something in excess of 0.8 million.

Many of the tourists who come to Okinawa to unwind and enjoy the slow life choose their stay in the quiet, calm, close-to-the beach and slow-life Onna Village.

Onna Village is located on the west coast of central Okinawa, and occupies a long, narrow stretch of the coastal land. The village stretches 27.4 kilometers from north to south but is only 4.2 kilometers from east to west. It’s located on the rugged hills that run from the north to central Okinawa, with Mount Onna being the highest point in the village. Most residents of the village are living on the few flatter areas and on the coast.

The coastal areas of Onna Village were declared a part of the Okinawa Kaigan Quasi-National Park in 1972 after the reversion of Okinawa to Japan. It is also one of Japan’s leading resort areas. Major resort hotels dot the East China Sea coast along Highway 58. They count as their customers former U.S. President Bill Clinton and Russian President Vladimir Putin who, among other world leaders, visited Okinawa for the 2000 Kyushu-Okinawa G-8 Summit.

Onna Village has always been known as a resort, but it has added another dimension to its fame since it welcomed the Okinawa Institute of Science and Technology Graduate University. The village continues to grow and in recent years has been adding some major hotels on the list.

Those who seek a more local feeling can drive through Onna on Highway 58, instead of the new bypass road. Along the road there are quite a few good restaurants. A good starting point would be Onna Michi-no Eki close to the southern edge of the village, which is the busiest road station on the island, or a farmers’ market further north by Onna Village Office where local producers offer fresh vegetables, fruit, fish and other products.

Along the west coast of central Okinawa, there are many beautiful beaches and scenic spots. Cape Manza (Manzamo) is one of the most popular picturesque sightseeing spots in Onna Village. One of the cape’s most photographed features is a cliff extending into the ocean shaped like an elephant’s trunk. Manzamo faces the East China Sea, and includes the Okinawa Kaigan Quasi-National Park that was originally established as a Prefectural Park in 1965, and re-designated with the return of Okinawa to the Japanese administration in 1972. Manzamo is at http://goo.gl/maps/vUvPH 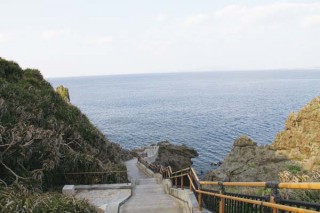 Cape Maeda is well-known to all divers on Okinawa, and may even be considered as a local Mecca for diving enthusiasts.

To get to Cape Maeda when coming from Naha on Hwy 58, turn left before the Renaissance Resort in Yamada. Driving along the coast you’ll come across the Cape Maeda sign where you have to turn right. There’s a parking lot up ahead. To experience a diving or snorkeling at Maeda, contact any dive shop on the island. Some shops even arrange night diving excursions at Maeda. An underwater cave at Maeda is a must-see destination that is easy enough even for beginners. The best diving season is from May through September. There is parking, bathrooms, showers (summertime only, from 9 a.m. to 6 p.m.), a changing room and a small food stall open during the summer season. Map is at http://goo.gl/maps/GYrkR 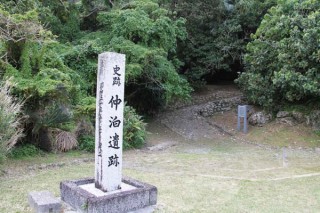 Nakadomari Ruins is one of Okinawa’s many prehistoric sites located in Nakadomari, Onna Village. It was named as one of Japan’s historic spots on Apr. 7, 1975. The site has remains of dwellings, and a kitchen dating back to the time before the start of Okinawa’s written history some 1,500 years ago. This is the largest ruins of its kind on Okinawa. In the same location there is the Hiyagon stone pavement hill, which is in use to this day. (from the Ministry of Education, Culture, Sports, Science and Technology) Map: http://goo.gl/maps/Dwk8q 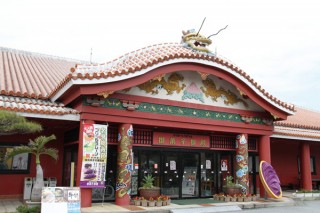 Known for its looks similar to the Shuri Castle, Okashi Goten is one of the most famous souvenir shops on Okinawa. Among the total of seven similar shops, the one in Onna Village was built in 2001 as the first, and also the first on Okinawa where visitors can observe the manufacturing process of the sweets sold in the store. There’s also a restaurant with a beautiful view of the ocean. Most of the products are made using sweet purple potatoes as an ingredient. Its most famous product is the sweet purple potato tart, of which ten million a year are said to be sold. Okashi Goten is at http://goo.gl/maps/qrqFm 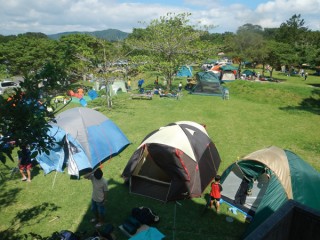 What a better place to spend some time in nature than the Kenmin no Mori Forest Park. A visitor will have no time to get bored here. The forest park was established in 1986 as a recreation center for residents of Okinawa in order to promote a healthier lifestyle. The park has a total of 181 ha of nature to enjoy hiking the mountains, sports, camping, barbeque, park golf and other outdoor activities. Admission is free, except for camping. The park is open from 9 a.m. to 8:30 p.m. from April to August and 9 a.m. to 5:30 p.m. from September to March. It’s closed on Mondays. To reserve a camping site, call 098-967-8092. Map: http://goo.gl/maps/PN0QO 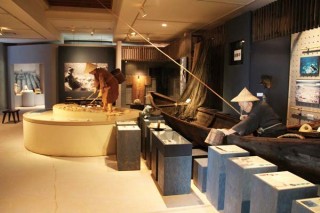 The Onna Village Museum is located in the Nakadomari district. Open from 9 a.m. to 5 p.m. from Tuesday to Sunday, the admission is ¥100 for adults, ¥50 for college students and ¥30 for elementary through high school students. In the museum there’s an exhibition corner displaying life in the old days in the village, a picture theater showing “The land protected by the Gods” and the history of the village.  Onna Museum is at http://goo.gl/maps/xoXvi 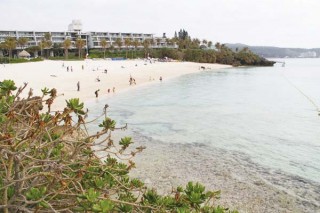 Hotel Moon Beach is located in the Maekaneku district of Onna Village, and has received the Trip Advisor Certificate of Excellence in 2012 and 2013. The hotel has guest rooms, restaurants, various marine and field sports to experience, indoor swimming pool, Japanese style bath house, gum, and even an open-air chapel with a view of East China Sea. It’s located about 60-minute drive from Naha Airport.