Nanjo City is full of history, beaches, places to see

Nanjo City is one of Okinawa’s largest areas, and arguably can be called one of the most fun packed cities in Okinawa. One could say it is the total opposite of a chewing gum, because the more you chew on it, the more flavors you will get.

Nanjo City is located in the southern part of Okinawa. The modern city of Nanjo was born January 2006 as a result of the merger of Sashiki Town and Chinen, Ozato and Tamagusuku villages, creating the city with a large land mass filled with history, beaches, new experiences, and lots of love.

Let’s start from the historic side of the city. The city is filled with numerous castle sites, shrines, tombs of famous former Ryukyu Kings, historical roads and places, of which importance one might not quite understand until actually visiting.

To get a little more understanding of the city’s historical side, it would be useful to know that included in Nanjo City is the sacred Island of Kudaka. Kudaka Island is a 15~20-minute ferry ride from Azama Port in Nanjo City. As legend has it, Kudaka Island is known to be where the Goddess Amamikiyo, who created the Ryukyus, descended to first. Even now the customs of the island are strictly respected and maintained.

According to Yoshihito Shinzato from the Nanjo City Tourism Association, “Kudaka Island is mainly known for being the Island of the Gods, but the island also has beautiful beaches and scenery to enjoy by cycling or walking.” He adds, “The island is relaxing, quiet and a perfect place to enjoy a book on the beach.” The existence of Kudaka Island gives the historic sites of the city a deeper meaning, and might give you a new perspective when visiting.

If you are more of a fun-in-the-sun beach lover or would like to enjoy the view, there are quite a few beaches to visit for a BBQ, swim or marine leisure, such as Hyakuna, Miibaru and Azama San-San beaches. The city also has over 50 cafes and restaurants with a variety of dishes to offer. Although it might be an impossible task to try them all, one can always try.

Since the city has so much land, it has not only one, but four Farmer’s Markets, and each one has different products and character. A drive to O Island may give you a get-away feeling while enjoying the quiet calm atmosphere, as if time had stopped.

Last, you may be wondering why the city has lots of love. Well, from it’s merging of the four town and villages, the city is now heart-shaped when seen on the map. Even the city logo is a heart with four white dots representing the four merged municipalities, and in between them a white line being Kudaka Island. 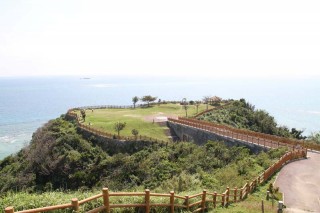 Cape Chinen Park is located on the Pacific side of southern Okinawa. From the park there’s a breathtaking view of the ocean and sky, not to mention a picture-perfect view of the island of the Gods; Kudaka Island. The 180-degree panoramic view is truly impressive. On weekends, the park is full of families and young couples.

Kaki-no-hana-hija was selected as one the 100 Most Famous Springs in Japan by the Ministry of Environment. Walking along a stone-paved path in the woods, visitors can see the water flowing out on the right side called the “Ikiga” (man) River” and the on the left the “Inagu” (woman) River. The shallow pool located down of the two streams is called “Uma-amishi,” meaning bathing place for horses. The spot also has a magnificent view of the Pacific Ocean.

In Okinawan dialect, the word “Nirai Kanai” means the closest place to the heaven. When driving on the bridge the blue sky seems to be right in front of your eyes as if the heavens were actually near. Although it is one bridge, it has a two-part name; Nirai Bridge and Kanai Bridge.

Kudaka Island in best known to be the Island of the Gods. The island is long and narrow with a circumference of 8 km, located 5.3 km to the east off Cape Chinen. According to a legend, Goddess Amamikiyo created the Ryukyus, and Kudaka is the spot she first descended. It’s called the island of the Gods because the legend describes it as the land where the creation of Okinawa took place. The island is very small and might not receive many tourists, but those who go must keep in mind that the island is sacred ground and has many shrines and worship sites. It would be smart to keep in mind not to enter into the shrines or veer off the designated path.

Gusuku Road Park has an elevated platform where visitors can enjoy the ocean view. In the center of the park, there is much playground equipment for children.  The most popular is the roller slide, which is fun for both children and adults. Many families bring lunch boxes and spend quality time in the park.

Sefa Utaki is one of the most famous and must see places in Nanjo. It is said the forefathers of Ryukyu settled here after coming ashore. It remains one of the most sacred grounds on the island.

This is an Okinawan theme park with the beautiful Gyokusendo limestone cavern, re-created neighborhoods with red tiled roofs, the Habu Park and Museum, and plenty of other sights to see. Eisa performance shows are held daily.

This is the oldest castle site on Okinawa, said to have been constructed by Goddess Amamikiyo herself. According to a legend, its rounded gate leads to Nirai Kanai.

This is a public beach overlooking Kudaka Island across the water. In the beach house, there is a shop, showers, lockers and other facilities. It’s the first beach in Japan to open for the summer season.

Here you can find Okinawan healthy herbs and food products such as noni, turmeric and much more.

The tomb of the sixth king of the Sho Dynasty.

The site has a lush forest extending across a valley formed by the collapse of a huge limestone cavern.

Two springs located in Hyakuna of the Tamagusuku districts. A legend says Goddess Amamikiyo began rice cultivation here the at the dawn of the Ryukyu history.

A legend has that a pot of grain drifted ashore on this beach.

In the grove, there is a fertility stone that is believed to give blessings for couples desiring children.