The “Okinawa International Movie Festival” launches its 6th edition today after sharing with many people inside and outside of Okinawa the concept of Laugh & Peace over five previous festivals. 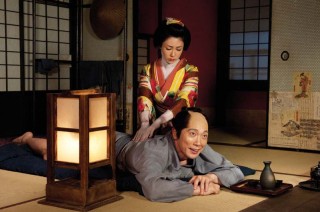 The festival takes place today through Monday at a variety of venues including the Okinawa Convention Center in Ginowan City, and surrounding areas.  Other locations are the Sakurazaka Theater and venue around Kokusai street in Naha City, Chatan, Urasoe, and Nakijin.  The Okinawa International Movie Festival Executive Committee is running the show, while being managed by Yoshimoto Laugh & Peace, Inc.

Since the inaugural festival, with the support of a number of sponsors, officials of Okinawa Prefecture and local

citizens, as well as many in the entertainment business in fields such as movies, television, publishing, games, digital content, web, music, performance, traditional performing arts, it has gradually grown to an event full of enjoyment, happiness and smiles. As it takes its next steps, the 6th Okinawa International Movie Festival has developed the new catch phrase of “All Things Great in All the Islands!”, aiming to be a movie festival which brings together all of the regions and people of Okinawa.

The festival is billed as serving as a means of spreading information and entertainment featuring the charms of Japan and Okinawa to the rest of the country, and the world.  There are dozens of sponsors signed on, including just about every governmental agency on the island, as well as media, foreign embassies and consulates, civic groups, sports associations and even other festival committees.

The Okinawa International Movie Festival Theme Song is “Egao no Manma” by BEGIN with Aho-na-Stars. The lyrics and music are by Akashiya Sanma & BEGIN. Schedules for the festival, as well as programs and synopses, can be found online at http://oimf.jp/cgi-bin/schedule/index.cgi?lang=EN.