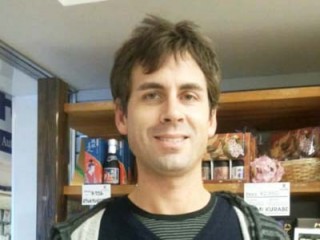 The winner of the weekly raffle this time is Ken Gamon, who won a pair of tickets to the Ryukyu Philharmonic Chamber Orchestra “Io” concert that was held at Okinawa Convention Center on Sunday.

Ken is from Los Angeles, CA, and has lived on Okinawa six years, and liks it. “Hopefully I’ll never have to leave,” he says, explaining “I love Okinawa and enjoy raising my children here.”

He says that he has adjusted living in Japan well. “I like almost all Japanese food, but I especially love ‘yakiniku,’” he says. He adds that one of his favorite pastimes here is to jog by local castle ruins early in the morning, which he does as often as possible.

He says that he has visited almost all the main islands of Japan, but he still haven’t gotten out to Hokkaido. “I would love to do some snowboarding in Hokkaido, and also see the famous Sapporo Snow Festival,” He says.