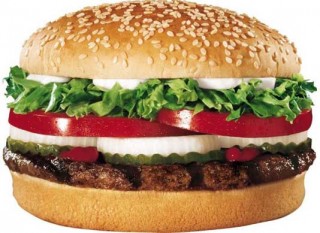 Here is a chance to experience another gastronomic experience unique to Japan: all-you-can-eat burgers at Burger King until Dec 1.

Perhaps influenced by Scandinavian smorgasbords, at some point in time “Viking” became the word used to describe buffets in Japan, and by extension certain all-you-can-eat promotions. The Japanese language lacks a “v” sound though, so the pronunciation became corrupted to baikin

Marketing execs at Burger King Japan noticed all it took was a little spelling tweak to go from baikin to “biking,” which ends up just a letter away from B(urger) King. BiKing ended up being the name given to the chain’s first all-you-can-eat promotion. Held in 2010, the inaugural BiKing was a huge success, proving without a doubt no one minds a cheesy pun as long as it’s followed by meaty sandwiches.

BiKing is back for 2013, starting on November 15. To get in on the action, first you have to order a large-size set of either a Whopper, Whopper with cheese, or fresh avocado Whopper, along with French fries and a drink. While that will set you back close to ¥1,000, the good part is that once you finish that off, you can have as many additional Whoppers as you can fit in your stomach. The promotion also includes unlimited refills of medium-size fries, onion rings, and drinks.

Burger King has imposed some regulations diners must follow, starting with fact you have to finish off all of your initial order before going back for a refill. Secretly stuffing your burger into your bag to eat later, then asking for another sandwich is expressly prohibited, as is sharing your burger bounty with your friends. Customers found breaking the rules will be required to pay the regular price for all of their ill-gotten extras.

Oh yes, the adventure in unlimited burger land is limited to 30 minutes after placing the order for your initial large-size set, so there’s no possibility of eating breakfast, lunch, and dinner on the BiKing plan. For that matter, breakfast is not an option, as the promotion is only offered from 2 p.m. until 11 p.m., or closing, whichever comes first.