Tihar, which boasts to be the one and only authentic Nepali restaurant in Okinawa, has opened its second shop in Chatan’s Hamby area. Tihar’s first restaurant has been in business since May on the second floor of Carnival Park in Mihama, and since it got a very positive response from the start, the owner decided to open a second one with slightly expanded menu in nearby Hamby.

The restaurant name, Tihar, is the name of a five-day Hindu and Buddhist Festival that is celebrated throughout Nepal, and actually means a festival of lights, as it’s marked by lit candles both inside and outside houses.

Although at first many might think that Tihar is just another curry joint, they would be wrong, as Tihar is distinctively a Nepali restaurant. Only in Tihar is one able to taste authentic Nepali dishes such as momo dumplings, which are somewhat similar to gyoza, or shumai dumplings commonly served in ramen and Chinese restaurants on the island but with different fillings than

include chicken, veggies and even cheese.

Then there is the pork choila, which is pork meat marinated in Nepali spices and then grilled. It’s usually hot and spicy, and often eaten as a snack or side dish for beverages, such as beer. It’s very popular in the Kathmandu area.

Apart from authentic Nepali dishes and  various curries, the menu contains a few Thailand and even Mexican dishes, too, although Thai dishes are only served in the new Hamby Tihar.

Apart from the delicious dishes, customers will definitely enjoy the service in the restaurant as the waiters and waitresses will politely and patiently help them decide which curry and nan to eat, based the mood and taste of the customer.

“There is nothing more enjoyable than a perfect combination of a curry and nan,” says Tihar owner Sagar Kapali, who has experience running five restaurants in Tokyo in the past. 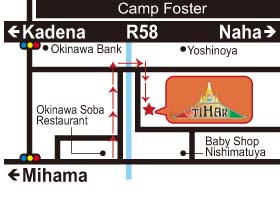 Apart from all the dishes, there is a wide variety of beers, including ones from Thailand, Sri Lanka, Indonesia, France, Italy and other countries.

Tihar also offers rooms and plans for parties of from 4 to 60 people, and if it’s a birthday party, you are in luck because the restaurant will be provide the cake as a courtesy, for free!

Tihar serves lunch from 11 a.m. to 3 p.m. that includes three types of curry to choose from, shish kebab, tandoori chicken, salad, nan or rice, dessert and beverage, and all that for just ¥1,350. There are also other lunch sets starting from ¥850.

The dinner is served from 5 to 11 p.m., when the whole expansive menu is available for a leisurely feast. Dinner sets start from ¥1,850.

The restaurant is open seven days a week, and besides Japanese yen, U.S dollars and major credit cards are accepted. Free parking is available in front of the restaurant.

As an opening campaign at the Hamby Tihar, all dinners are 20% off the menu prices through the month of October.