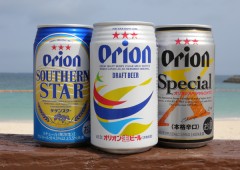 Declining beer sales are part of the reasons being attributed to Orion Beer venturing into a non-brewing industry, choosing to get involved with Japan’s Renewable Energy Purchasing by Fixed Price System.

The Nago City-based brewery plans to join production of electric power, and selling electricity too, starting coming fiscal year 2013.  Orion says it plans to purchase two parcels of land in Nago and another in Itoman to set up a total 5-megawatt photovoltaic generation facility.  Orion’s forecast is that the application and contract process to the government and to Okinawa Generating Company will take about a year to complete.

Orion says it plans to invest a total of ¥1.5 billion, about ¥300 million per one megawatt.  Return on investment is estimated to be ¥200 million each year.  The Japanese government sets the price, which is currently ¥42 per kilowatt in the first year of the system which began in July.

Prices could fall after next fiscal year, some observers say, so Orion is working with Japanese officials to get facilities recognition and sales contracts with Okianwa Generating Company before the end of March 2013 so it can receive lock into the higher price.

Beer sales are slipping, at least in part because of a decline in young population, but also because of the way younger people are shying away from alcohol.  Orion says its market strategy is to seek new gains by sinking roots in non-beer and beverage undertakings.

Orion’s earned cash surplus was ¥17 billion the end of March 2012, so corporate officials decided that taking the risk of getting into the electricity business wasn’t high.  They believe effective assets investment and investment efficiency are both good.  Orion says it will recoup the investment costs over the next ten years, with an investment yield of 6~7%, not counting land acquisition and rental costs.

The brewing company says it needs 10,000~15,000 square meters of site space for each one megawatt of power generating capability.  It’s already looking ahead to potential expansion of its power business.