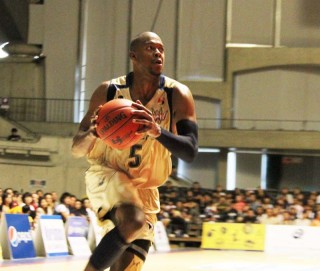 Anthony McHenry and David Palmer picked up where they left off last season, although now in opposing teams, as the defending Basketball Japan League champion scored a pair of season-opening road wins in Kyoto.

Okinawa kicked off the season Saturday with an easy 82-73 win over the Kyoto Hannaryz, then struggled a bit on Sunday before turning the corner to pick up win number 2, 84-74.  Palmer tallied 14 points for Kyoto on Sunday, while McHenry of Golden Kings exploded and scored 29 points after tallying 11 on Saturday.  All-star guard Narito Namizato added 12 points and five assists, while newcomer Terrance Woodbury, who played college ball at the University of Georgia, scored nine points coming off the bench.  In Saturday’s opener, Woodbury racked up 28 points.

The victories were a plus for Koto Tohyama, Okinawa’s new head coach.  Tohyama is only the team’s third head coach, having come to the Golden Kings from the Miyazaki Shining Suns, where he spent two seasons.

Okinawa remains on the road, next playing the Takamatsu Five Arrows in Kagawa Prefecture on the 21st and 22ndd.  The Kings make their home debut on the 27th and 28th against the Shiga Lakestars at the Okinawa City Gym.

Elsewhere in opening weekend league play, in Niigata the former Golden Kings coach, Dai Oketani, led his Tohoku franchise Big Bulls to a pair of wins over the Albirex BB, 88-82 and 94-85.  One fan posted his congratulations to Oketani, who won two championships in Okinawa, saying “Congrats on the road sweep, coach…You got that ‘magic’ touch.”

The Hamamatsu Higashimikawa Phoenix couldn’t put everything together, losing their season opener to the Sendai 89ers, 63-61.  Sunday they rallied and pushed the game to overtime to eek out an 86-81 win.  In the other opening weekend action, the newest franchise in the league, the Gunma Crane Thunders, put up a challenge against the Toyama Grouses, but couldn’t muster enough points to win.  The Crane Thunders fell 96-90.