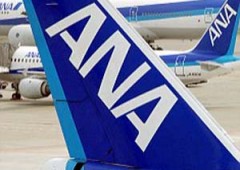 All Nippon Airways says  that more than 40,000 seat reservations have been canceled on its Japan-China flights for the three months to November, as tensions mount between China and Japan.

The canceled seats had been booked for group tours. Of them, about 12,000 were for flights to China and the rest to Japan.  ANA’s rival Japan Airlines says that about 15,500 seats reserved for group tours have been canceled on its Japan-China flights for the same three months to November.  “I understand that demand for routes which attract many tourists will be tough for the time being,” ANA president Shinichiro Ito says. “But cargo, which accounts for a high ratio in our revenue, has not been affected much.”

He also told a news conference that smaller aircraft will be used to serve routes where demand has sharply declined.