Kuroshima. Kuro Island. Kuroshima Island. No matter how one describes this miniature island measuring only 12.6km around, it’s something to behold.

Only 200 people live on this tiny island in the far southern reaches of Okinawa Prefecture, in the Yaeyama chain. Kuroshima’s shape is like aheart, leading to it being called “heart island”. The island is made of coral reef, and so is flat ground.

It is also said that cattle on the island outnumber the occupants, and most of the island is for use as a cattle feeding zone. The road from Kuroshima Village to Kuroshima port is chosen as the one of most beautiful roads in Japan, because of its old Okinawan style of red tiled roofs and stone fences. To visit Kuroshima island, it takes a half-hour by ferry from Ishigaki port, and about 45min. on foot from Kuroshima port to the village. A bicycle makes it easier to cover the 2.5km distance in about 12 minutes.

Iko wharf is a pier located a bit north from the village. It was built in 1935, and looks so retro. Some parts of the pier are currently broken. Once it was important for traffic, fishermen and moving carriages about. Recently anglers gather there to fish. From the pier’s 330m length you can see the panorama view of the surrounding ocean. It was registered as a tangible cultural property in Japan in 2005. 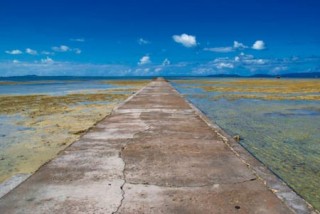 The most popular beach in Kuroshima is Nakamoto shore, because of it’s clear water. You can play at the beach, and also slide beneath the water snorkeling to watch the beautiful coral reef or tropical fishes. You can go onto the reef on foot during low tide, and play in natural pools within the reef, and see sea creatures like crabs and shells.

There is a toilet and shower room in the summerhouse on the beach, and there are a lot of rocks or sharp reef, so locals recommend wearing boots or sneakers, even when walking in the water. 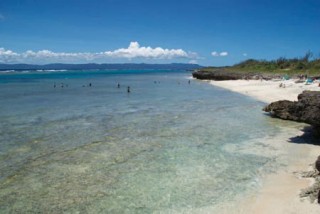 Kuroshima lighthouse is located at the southernmost tip of the island. From there one can see a panorama of the Pacific Ocean, and the reef in front of you that is extremely beautiful. The lighthouse is two kilometers away from the village and the road’s paving is not good, but it is said that love will be accomplished once one gets there. Many couples love to visit the lighthouse, but there are no facilities, so carry a drink along.
When visiting Okinawa’s southern islands, check with th Okinawa Tourland Hotel Booking site, <A Href=”http://eng.tourland.co.jp” Target=”_blank”>http://eng.tourland.co.jp</A> for special prices and deals on hotels, transportation and acitivies.

« Typhoon Bolaven gets Okinawa excited, fizzles
And this week’s winner is… »