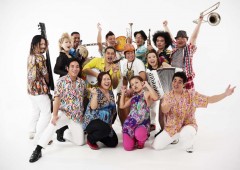 Salsa’s a heavily drum-flavored music first spawned outside Cuba in the 1970’s and then caught fire and began spreading first across the Caribbean, and now, around the world.

Salsa means ‘sauce’ in the Spanish language, carrying with it the connotations of spiciness common in both Caribbean and Latin cuisine.  It acquired its musical meaning in both languages, partially to denote swing or soul music, a “hot” and “wild” music experience.  It traces back to the 1930’s when vocalist Beny Moré would shout “salsa” to accent his band’s music.  Max Salazar also traces it back to the same era, when songwriter Ignacio Pineiro composed Echale salsita, a Cuban song protesting tasteless food.  While Salazar was intending to generate an origin meaning “danceable Latin music”, Ed Morales motivated his band to get them to increase tempo, telling dancers to “put it in high gear”.

Closer to home, Kachimba is an Okinawan salsa band. There are four elements to the band. The full band consists of 14 vocalists and musicians, four special pickup members and two other groups who also play good music.  The leader is Taro, a percussionist, who says KACHIMBA has a lot of meaning like dice and pipes. It also has a meaning fount, so he put the sense into the band to bring upwelling power to everyone.

Although most of the members are from Okinawa, people also come from Peru, other prefectures because of studying, and an American percussion player of the band who works on MCAS Futenma  also makes music in the group. However Taro says their home villages are not important; “Significant is whether we can enjoy music together”.

Salsa has a meaning「sauce」that indicates to interweave various things into one. So the overwhelming feature of salsa is to combine multihued identities and music. “Salsa spreads to the world with absorbing various cultures. It gives a feeling that there is no border for music,” Taro says.  One of the fascinations of Salsa is people can communicate through music. Additionally, a lot of world music and cultures have been mixed in Salsa, so it is also a magnetic point.

The 38-year-old leader, Taro, was the first person to star a Salsa music shop outside of the bases in Okinawa. He first met music in Hokkaido. In the past, he worked in Japan Self-Defense Forces playing bugle as his occupation, because he wanted to travel abroad.

At that time, he met the former leader of Diamantes who suggested enjoying music together. Taro says it was a destiny. After the meeting, he resigned from his work and started working in a Cuban music bar. By special chance, he tried to become a professional in music and ended up back in Okinawa, and started the band as a group for people to enjoy Salsa. That was back in 1998.

Before he started the bar, there was no salsa dancing place outside the U.S. bases in Okinawa. Two or three years later, the number of salsa music bars began increasing slowly. He says he wanted to become a person who’d go outside to find new worlds.

To play Salsa music made in Cuba is only copy or fake. Taro says “We cannot exceed the original Salsa music.” Moreover, when they played Salsa music with Okinawan folk songs while visiting Cuba, the songs were accepted by the local people and they were pleased. Therefore they decided to create original songs and real music with absorbing folk songs from Okinawan culture in Salsa, based on Cuban music.

Okinawan rhythm and Salsa’s beat, they are different, says Taro, and thus it is a challenge to combine them together. As a result, when they mix the music, they focus on the lyrics of both songs. To pay notice to the words related to daily life and to seek similarities between these songs and culture, which is the key point.

The leader Taro has been to Cuba nine times, and now the members of Kachimba save money to go to Cuba once more and enjoy authentic music. They had visited the island for four consecutive years from 2001 to 2004, and  are planning to visit there next year again. “We want to get energy from there, and I want to give our members a brain wash with Cuban color,” Taro says. “In Cuba, we can hear overflowing music and play musical instruments everywhere. And the local people are also very friendly. The country is a fascinating place. “

Everyone has their favorite songs and music, so Kachimba makes music every person can enjoy in his or her own way. They call their music “Kachimba chanpuru”; that is various songs for everyone. And they put a lot of effort to provide original songs that brings people together. To make music and play songs is difficult because various identities reside in Salsa. However it is fun because gathering people together creates something new. “We want to create a place that everyone enjoys,” Taro says.

Taro says “I’d like to keep making Original Chanpuruu Salsa music with Okinawa and Salsa, based on Cuban music. And we hope we will root Salsa music, dance, and culture in the Okinawan society as an item that everyone here can enjoy”.   He also hopes the band Kachimba lasts for years to come, “And I want to absorb the world music into our music more, and play those songs in foreign countries. In doing so Okinawa will spread to the world. And I want to hold a world music event to show charms of foreign music in the near future.”

Places where people can enjoy Salsa: Salsatina in Naha, Latin Soul in Koza are Salsa bars. If you would like to practice Salsa dance, Studio Claverio is good. When you want homey feel, Salsa Caliente in Naha and Caribbean Cafe Bar Mil besos, managed by Kachimba, in Ginowan are the best. You can learn how to dance at all the places. If you feel like to enjoy Authentic vigor and atmosphere, you should join the Caribbean Party at Live House MOD’S. The event takes place on the last Saturday of every month. In Mil besos, live performances are on stage every Thursday and Friday. The focus on Thursdays is the world music, and music rooted in Cuba is played on Fridays. In addition, Salsa dance lesson is set on Wednesdays. Mil besos is closed on Mondays and Tuesdays. Kachimba also offers an event called Kachimba Fans’ Gathering on every Monday at Partida in Ginowan. In the event, musicians and visitors are very close. Everyone drinks together, and enjoys music and dance in a homelike atmosphere.