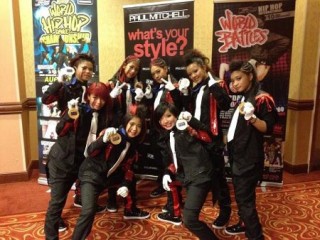 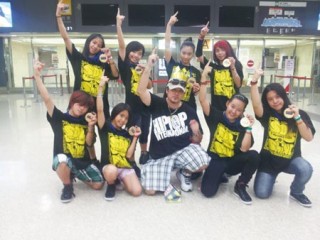 More than 3,000 dancers from about 40 countries took part in the event, and the Sol-T-Shine varsity of Japan won the championship of class of varsity, ages 12-18. The members of Sol-T-Shine, eight young female dancers 12 – 15 years of age, are all members of Dance Studio T-da from Chatan, Okinawa. Kirara Matsuda, Kako Tokumoto, Nanase Tomimura, Hinano Nishihara, Hijiri Matsudo, Kirina Harada, and Runa Touma, are all Junior High School students while Ramu Inamine is still in the elementary school.

The seven girls and one boy took first place of the tournament both in the preliminary and semi finals, and then won the final match pitting them against the remaining eight teams. “We were anxious until the final round,” says the team’s coach, “but bit by bit, the kids consciousness and concentration became higher and they danced to their maximum power.”

A team from New Zealand placed second. After the event ended, the master of ceremonies asked the crowd what they thought and the audience roared “Sol-T-Shine” as the most amazing competitors in the championship. Said the coach, “I got goose bumps watching them, and I’m really proud of them.”

The dancers thought they did pretty good too, with one noting “although other teams were getting high marks, and we were a bit anxious whether our performances would be good enough, but we did our best.” Another grinned, saying “it was so surprising, we had tears in our eyes when we heard we are the champions. I sure appreciate my teachers, parents and teammates.” “Competition was great. I’m not sure there’s any other competition that could have been such a great experience” was the way another teenager described the time in Las Vegas.